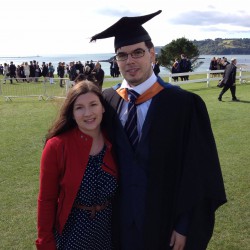 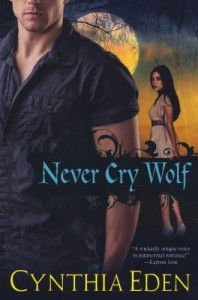 Lucas Simone is not the kind of guy you mess with. He's big, he's strong, and his eyes hint at a wilder side most women can't handle. Of course, that's because his predatory instincts are no metaphor-he's a genuine Grade-A top-quality werewolf, tough enough to fight his way to dominance over the scariest pack on the West Coast. There's only one chink in his armor. Unlike most alpha dogs, Lucas has a reputation for protecting the weak and innocent. Sarah King is counting on that protective impulse-it's the only thing standing between her and certain death. There are only two problems: one, she's not quite as innocent as she'd like Lucas to believe. And two, if he doesn't stop stoking Sarah's animal lust, it's only a matter of time before her own wild side gets unleashed.

Never Cry Wolf has been described as a dark, gripping paranormal suspense and I really think that sums up Never Cry Wolf brilliantly. I haven’t read one of Cynthia Eden’s paranormal stories before and I wasn’t quite sure what to expect but I’m still glad I read it because I was intrigued by the blurb and the excerpt and really Never Cry Wolf never stopped keeping me intrigued. Although Never Cry Wolf is primarily about Lucas and Sarah there are of course several other storylines going on that set up possible future books which I really liked with characters that I liked more than Lucas and Sarah. I’m not quite sure what my problem was exactly but I just couldn’t connect with either characters, even though I liked them both and enjoyed their story I just wasn’t drawn into them as a couple. I found Lucas to be extremely alpha and although I normally like that type of character I felt sometimes it was too much with what else was going on in the storyline. However, I still liked Never Cry Wolf and will possibly be trying out the first book in this series later on and will most defiantly be reading the next book in this series as I really enjoyed the secondary characters in Never Cry Wolf more than the main couple.

Favourite Quotes:
“Lucas wasn’t a stupid man. If a sexy woman wanted to plaster her curves against him, he wasn’t gonna argue. But he was most certainly gonna take.”

But she kissed his ear again. “Everything you’ve done,” she told him, the words a breath in his ear. “Just made you stronger.”

Overall, I enjoyed Never Cry Wolf and can’t wait to read more in this series.